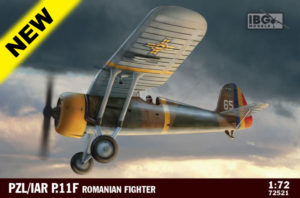 The P.11F was the third (after P.11c and P.7a) most numerous version in the long line of PZL fighters based on the seagull-wing concept of Eng. Zygmunt Puławski.
Its history starts in the fall of 1934, when after the development of a new, significantly modified version of the P.11 fighter (P.11c – see IBG set No. 72519), PZL factory began efforts to attract foreign customers for the airplane. The first step was the presentation of the fifth P.11 (P.11/V) prototype at the Paris Air Show in November and December of 1934. Romania, which had previously purchased 50 aircraft of the P.11B version from PZL (see IBG set No. 72518), decided to purchase the license for production of the latest variant, which was to be built at Industria Aeronautică Română (IAR) in Brașov. The order was placed at the beginning of 1935 – PZL factory was to provide documentation, a complete prototype and sets of prefabricated materials and spare parts constituting the equivalent of 10 airframes. However, the transaction dragged on due to numerous political and financial obstacles. Ultimately, the aforementioned prototype (P.11/V with an engine changed to IAR 9K) was handed over to the Romanian side only at the beginning of 1936.
Production, launched with the support of Polish engineers, began at the end of 1936 and was based partly on products manufactured in Poland – the most characteristic ones are the Szomański propellers and Stomil tires.
In comparison to the P.11c, the Romanian version differed in the engine and its covers (IAR 9K rated at 600 HP), propeller, armament (4x 7.92 mm FN Browning Modèle 1932, which, owing to their rate of fire, made with the P.11F the best-armed version of the P.11), gunsights, Romanian flight instruments and other smaller equipment details.
The commencement of production of the all-metal P.11F with a partly semi-monocoque fuselage represented a significant technological change for the IAR factory, which until then produced only airframes of mixed construction with truss hulls. The newly acquired experience with all-metal constructions turned out to be invaluable for the Romanian aviation industry and finally paid off a few years later during the construction of the most famous Romanian aircraft – the IAR 80.
As a result of the aforementioned delays, the first P.11F fighters were introduced into first-line units of romanian aviation only in July 1937. The last, ninety-fifth, airplane produced was handed over in November 1938. Due to the rapid development of aviation technology, it was no longer the youngest construction, but compared to the aviation of other Balkan countries, the 95 Romanian P.11F was a significant force. In 1939, however, much more powerful opponents appeared on the horizon.
P.11F were ready to defend the Romanian sky during the crises of 1940 (when the Soviet Union occupied Bessarabia in June and between July and September during the dispute with Hungary over Transylvania), invasion of Yugoslavia in April 1941 and finally took active part in Operation Barbarossa – performing mainly ground-attack missions. At the end of that year, they were withdrawn from the Eastern Front and transferred to Romanian air defense and training units. Eventually the last units in schools ended their service in 1948.
In addition to one prototype built at the PZL factory, 95 machines were produced in the IAR plant in Brașov (numbers 51-145) between 1936 and 1938. Unfortunately no P.11F fighter survives today.

RENDERINGS OF THE MODEL:

PAINTING SCHEMES IN THE BOX: