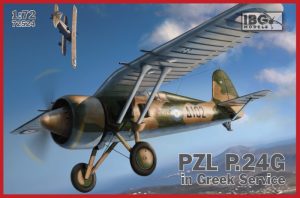 P.24 fighter plane, just like the P.11, was developed from the P.6 construction built by inż. Z. Puławski. This aircraft was built for export, equipped with a powerful engine and showing good performance. Because of the licence contract, forbidding re-exporting engines produced in Poland, the export version of the plane had to be powered by engined made by famous Gnome- Rhône company. Design work for the fighter planes for Polish Airforce and for export went on in the same time, so the best possible solutions could be applied to both. Thanks to that serial production P.11a received the vertical stabilizer designed for P.24.

After building two P.24 prototypes based on P.7 fighter, PZL factory decided that the third prototype will be constructed using as many parts from the newest fighter version – the P.11c. Third prototype became the production standard for serial machines, because of that P.24 received the tail parts and wing from P.11c. New engine in double star configuration made it impossible to arm the plane with fuselage mounted machine guns, which shoot through the space between the cylinders. Because of that P.24 received armament mounted only on the wings, which was done by adding the second gun bed and all the necessary instalations for it. Alternatively, instead of two internal wing machine guns the aircraft could be armed with two 20mm Oerlikon guns, mounted under the wing in an innovative way, hidden under fairing which cover the gun and the wing struts connection.

Succesful fighter plane quickly became an export hit and the most recognizable PZL construction in the world. It was bought, as either finished machines or building licence, by Bulgaria, Romania, Turkey and Greece. Many international airforces declared a desire to buy the fighter, but the start of World War II made the further production impossibe.

PZL P.24 G, armed with 4 machine guns, was the core of the Greek Airforce fighter fleet during the Italian invasion in October 1940 and six months later, when Germans joined in the fighting. The PZL construction has proven itself while defending the Greek sky from the invaders, Greek pilots on P.24s shot down 37 Italian and 3 German planes.

Only one PZL P.24 has survided until today, it is on display in the Turkish Airforce Museum in Istambul.

Markings included in the box: