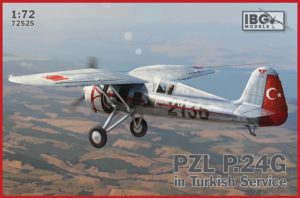 P.24 fighter plane, just like the P.11, was developed from the P.6 construction built by inż. Z. Puławski. This aircraft was built for export, equipped with a powerful engine and showing good performance. Because of the licence contract, forbidding re-exporting engines produced in Poland, the export version of the plane had to be powered by engined made by famous Gnome- Rhône company. Design work for the fighter planes for Polish Airforce and for export went on in the same time, so the best possible solutions could be applied to both. Thanks to that serial production P.11a received vertical stabilizer designed for P.24.

After building two P.24 prototypes based on P.7 fighter, PZL factory decided that the third prototype will be constructed using as many parts from the newest fighter version P.11c as possible. Third prototype became the production standard for serial machines, because of that P.24 received the tail parts and wing from P.11c. New engine in double star configuration made it impossible to arm the plane with fuselage mounted machine guns, which shoot through the space between the cylinders. Because of that P.24 received armament mounted only in the wings, which was done by adding a second gun bed and all the necessary instalations for it. Alternatively, instead of two internal wing machine guns the aircraft could be armed with two 20mm Oerlikon guns, mounted under the wing in an innovative way, hidden under fairing which covered the gun and the wing struts connection point.

Succesful fighter plane quickly became an export hit and the most recognizable PZL construction in the world. It was bought, as either finished machines or building licence, by Bulgaria, Romania, Turkey and Greece. Many international airforces declared a desire to buy the fighter, but the start of World War II made the further production impossible.

Turkey, as one of the main recipients, ordered 40 P.24A and P.24C machines and bought the licence to build more. The assembly of first 20 planes from parts brought from Poland started in KTF factory with a technical assistance of PZL specialists. Fully independent production started afterwards. The most advanced P.24G version managed to enter the assembly line at the very end of the first series – excluding the prototype, 4 machines of this version were built. P.24 planes entered service already in 1936, becoming the core of air defence of western parts of Turkey. It was the first Balkan Entente country that introduced PZL fighters into service (next in line were Greece and Romania). Despite the alliance with Great Brittain and other Balkan countries, Turkey did not enter the war and the P.24 together with more modern fighters protected its neutrality until 1943, when last machines were withdrawn from frontline units.
Only one PZL P.24 survives today, it is on display in the Turkish Aviation Museum in Istambul.

Markings included in the box: