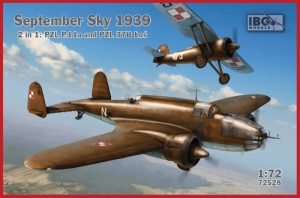 P.11 fighter plane was designed as a development of the inż. Z. Puławski’s P.6 construction. After Puławski’s death in March 1931 his main cooperator, inż Wsiewołod Jakimiuk, took charge of the development of the fighter plane. P.6 construction was changed so the 700hp engine could be used. Despite the fact that consecutive prototypes were constantly modified, the producer was able to send them to international air contests and achieve successes: second place in International Air Meeting in Zurich in 1932 and the highest speed in National Air Race contest in Cleveland in USA (plane was disqualified due to a misunderstanding). PZL construction was notices by the whole world, which resulted in the orders of the future versions of the plane from Poland and from abroad.

In 1933 a P.11a version with the Bristol Mercury IV engine was developed for Polish Airforce. This machine passed the tests in spring the same year, which resulted in the order of 30 planes, later increased to 50. The production was delayed because of the order of P.11b for Romanian Airforce, PZL was able to start P.11a variant in spring 1934. Producing the whole order took several months and ended in summer of the same year.

Polish Airforce Fighter Squadrons were still employing P.11a planes in 1939. They took part in the Defence War since its start to the very last days and the evacuation forced by the Soviet attack on 17th September. After the evacuation several surviving machines joined the ranks of Romanian Airforce, used as school planes. One plane ended up in Hungarian Airforce, where after the military trials it was employed to pull the gliders in aeroclub.

None of the P.11a planes have survived until today.

PZL.37 Łoś was a Polish medium bomber designed in mid thirties in PZL factory in Warsaw by Jerzy Dąbrowski. The early A version was fitted with a single vertical stabilizer, while the later A and B version already had improved twin tail. Only 10 (out of around 100) planes with a single stabilizer were produced. Serial production of the Łoś plane stated in 1938. By the time it was built Łoś was one of the most advanced bomber aircraft in the world. The PZL.37 planes were used by Polish Airforce during the September 1939 War against Germany. 26 of them were later withdrawn to Romania, and after that seized and used in the 4th Group of Romanian Airforce. Captured planes were also tested by Germany and Soviet Union.